HPDC is the premier local race of Honda Phils. Inc. using the same machine for all riders, the CBR150R, Honda’s 150 cc race bike inspired, equipped with MotoGP DNA engine. With Honda’s history of technological development tied to its decades of motorsports participation, the HPDC is poised to be the race of young riders’ in reaching their DREAMS of becoming champion racers.

The HPDC had a total of 9 young aspiring riders from the ages of 12 to 17, coming from a pre-qualification process. The youngest riders are #9 Sean Andrej Ondillo and #7 Alfred Jakob Sablaya, who thrilled the crowd with their skill for their age, as Sablaya even managed to garner the most points out of the competitors. 16-year-old female rider #10 Ericka Ondillo was also a standout in the race, and it was also her first time competing with a manual transmission bike.

On Race 1 in April 22, the pack was led by Bergania, Barcial and Sablaya. However during in the heat of battle, Bergania had a mishap of with rider #2 Wyner Blente, causing him to be overtaken by  rider #8 Andrei Reyes. Meanwhile, #10 Ericka Ondillo and Jasper James Cruz kept battling it out for the 4th and 5th, with Ondillo eventually clinching the lead. Eventually, Sablaya and Barcial secured the 1st and 2nd places respectively, while Bergania slid off to lose the 3rd spot to Andrei Samuel Reyes. Barcial had the best time of 2:07.954

The heat was on during Race 2, as aspirants gunned to dethrone Sablaya. The more experienced rider Barcial and Bergania fought once again with Sablaya to lead the pack. On the other hand, Rider #8 Sean Ondillo, rider #12 Jasper Cruz, #10 Erika Ondillo, Wyner Blente and Andrei Reyes was closely knit on the track, making the competition intense. As the group approached the last corner on lap 6, #12 Jasper Cruz bumped off with #8 Sean Ondillo causing him to slide off the track.

The race 2 was concluded with Sablaya, Barcial and Bergania securing the podium finishes for the 1st, 2nd and 3rd place, respectively who celebrated at the podium after the race event.

Going at the Overall total points of HPDC Round 1, #7 Alfred Jacob Sablaya garnered the most points, followed by #6 Sean Ethan Barcial, and #8 Andrei Samuel Reyes.

With the grand winners ultimately determined by total race points, the Honda Pilipinas Dream Cup 2018 is expected to have several turn of events before it crowns its champions, with 5 rounds still to go.

Ultimately, Honda’s goal is to develop young talents in motorsports to further promote and intensify the spirit of racing in the country. This thrust is still part of Honda’s newly-launched branding campaign ONE DREAM, which in terms of racing, aspires to make racers’ dreams come true with Honda’s advanced and cutting-edge MotoGP DNA race bikes.

Here are the current standings for Honda Pilipinas Dream Cup 2018: 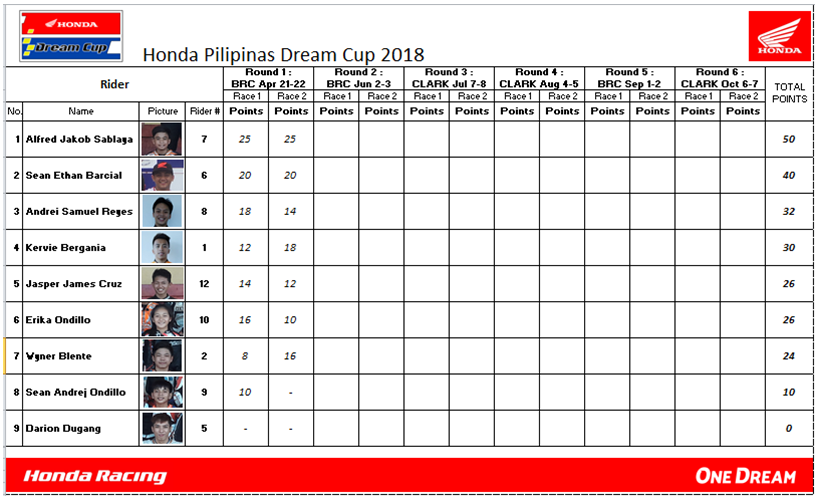