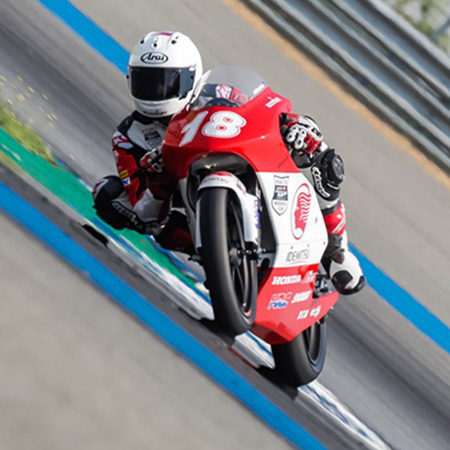 March 24-25-Buriram, Thailand- Troy Alberto, the Philippines’ sole delegate at the Idemitsu Asia Talent Cup (ATC), a premier international race for aspiring young talents in the Asia and Oceania region, manages to climb up the ranks at Round 2, Race 3&4 of ATC held at Buriram, Thailand.

The ATC is racing prodigy Alberto’s first ever international race, and he was the only Filipino to qualify for the event. During Round 1, Race 1&2 held in Losail, Qatar, Alberto was met with several challenges, one of them being face with competitors who are much more experienced riding the Honda NSF250R and with riding in previous international races.

Alberto also endured an accident in Round 1, Race 2, which caused him to withdraw from the race and gave him injuries with which he is still recovering from. However, he gunned for a stronger comeback in Round 2.

With perseverance, Alberto managed to finish stronger, placing at 13th from his previous 15th place finish. He also managed to earn more points for himself, which will propel him to next rounds of ATC.

Meanwhile, Japanese racer Haruki Noguchi dominated Round 2, Race 3, after a close fight with Mario Aji from the very beginning of the race. While the two were clearly dueling for the lead throughout the race, several riders fought hard for the third spot. It was Australian rookie Bill Van Eerde that emerged on the podium.

Eventually, Van Eerde won Round 2, Race 4, however it was not enough to clench the top spot overall from Noguchi. Afridza Munandar got the third spot in Race 4.

After the race, Alberto journeyed back home to the Philippines to recuperate and rest for the Holy Week. He will then resume his training with his NSF250R at Clark International Speedway to prepare for his next international race – the Thailand Talent Cup (TTC) which will be held on April 19 to 22.

With four more races of the ATC to go, Honda Philippines, Inc. (HPI) is supporting Alberto, who is hoping to go higher up the ranks as ATC is seen as one of the ways to eventually qualify for more prestigious international races.

The ATC is scheduled in time with Moto 3, Moto 2 and Motorcycle Grand Prix or MotoGP, Round 3 for Race 5 & 6 shall be held at Sepang International Circuit, Malaysia on July 27 to 29, 2018.

The Fédération Internationale de Motocyclisme (FIM) Asia is the governing and sanctioning body of the competition; while the National Motorcycle Sports and Safety Association (NAMSSA) is the Accredited FIM certifying body in the Philippines.