Clark International Speedway (CIS), Pampanga-August 4-5, 2018- The young guns are back again in Clark, Pampanga this time with more confidence and determination to win. Wyner Blente who missed 2 race legs due to wrist injury, made a comeback and began coping up and making himself comfortable on his CBR150R once again. At the qualifying round, riders each made their own pace looking for their own racing line to cover the 4.189 km course in a short period of time. As a result, Rider #6 Sean Barcial from Bulacan has secured P1 with his best time at the track of 2:25.902, followed by #1 Kervie Bergania for P2 with a 2.532 second gap and #7 Alfred Jakob Sablaya on P3. On the 2nd row, Rider #10 Erika Ondillo on P4, #8 Andrei Samuel Reyes P5 and #12 Jasper James Cruz on P6. On the final row, Rider #2 Wyner Blente and rider #4 Sean Ondillo got the last row.

During the start of the action, Sablaya, Bergania and Barcial were already trying to break away on the first corner from the group as the first lap already determines the leading pack. Unfortunately on the 2nd lap, Barcial took a slide on the 3rd corner from his approach on the outside, leaving the battle for first between Bergania and Sablaya during remaining 3 laps as they took on the exchanges very closely. On the other hand, the clash of Erika Ondillo and Andrei Reyes was equally interesting to see as they battled for the 3rd place. As the race concludes, it was Sablaya who took 1st place by a margin of 0.034 seconds from Bergania who took 2nd place. It was Erika Ondillo who managed to take the 3rd place with a margin of 0.118 seconds from Reyes taking the 4th place. Cruz, Blente and (Andrej) Ondillo was at the last pack, taking the 5th, 6th and 7th place.

It was another hot track for Race 2, which did not hamper the focus of the young riders. With Barcial at P8 due to his Race 1 mishap, Bergania and Sablaya took this opportunity to take the lead. As race 2 started, it was already intense for all the riders as each battled out on the full stretch of the course, and Barcial even managed to take on with his competitors to get in the first group. It was a close battle between Bergania, Sablaya and Barcial who were taking turns in getting ahead with each other and trying to take the lead and claim their place. The 2nd pack composed of Erika Ondillo, Andrei Reyes, Jasper Cruz, Wyner Blente and Sean Andrej Ondillo who each had larger gaps. Race 2 was a 6 lap race with no space for errors for the lead pack as they switched positions, trying to outmaneuver each other. As the white flag was raised, the riders new it was their last shot to finish the race strong and push it to the limit. The audience was at the edge of their seats waiting for who would win, so when the riders reached the final corner, Bergania, Barical and Sablaya were side by side in making their photo finish. In conclusion, it was Sean Barcial who managed 1st place, while Jakob Sablaya settled for 2nd place and Kervie Bergania for 3rd place. Erika Ondillo finished strong on 4th place, followed by Andrei Reyes on 5th place, Jasper Cruz on 6th place, Wyner Blente on 7th place and Sean Andrej Ondillo on 8th place. 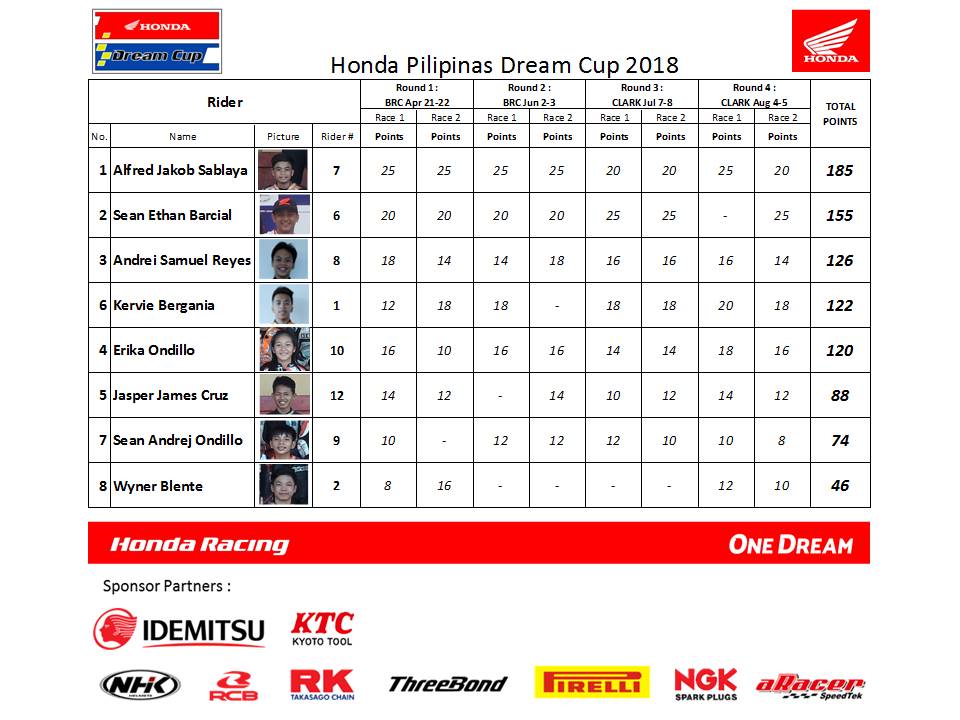