Rosario, Batangas; September 7-8, 2019 – Everyone was back at the Batangas Racing Circuit (BRC), the home of the Philippine Motorsport -for the Round 5 of Honda Pilipinas Dream Cup (HPDC). Riders were more prepared and ready to race as they trained at the Honda Racing Clinic last August 31 in the same track.

Qualifying Round, September 7 – It was a windy day for the qualifying race. #01 Jakob Sablaya made another record for the HPDC as he clocked a 2:03.493 versus his last best time of 2:03.985 in BRC -securing his pole position in the grid.

Meanwhile, #09 -Marco Ventinilla and #05 -Travhys Parallejas had completed the front row for P2 and P3 while #06 Chino Perez Hung, #7 Kokoy Mangibin and #08 Kurt Villanueva completed the 2nd row. #02 Andrej Ondillo and #04 Chad Mangulabnan, on the other hand, came in the 3rd row.

Race 1, September 7 – As the light went out indicating the start of the race, it was #01 Jakob who took charge and made sure to take advantage of his position in the grid, making his break away on the first turn.

#09 Marco, #05 Travhys and #06 Chino were battling closely behind on the first 3 laps until #09 Marco made a mistake and caused his low side. #01 Jakob, on the other hand, -was consistently increasing his gap with the rest of the pack, finishing the 8-lap race strong with a 30.562 seconds gap.

While #05 Travhys and #06 Chino were battling for 2nd, they were side by side on the stretch and taking turns to take the lead on the corners. #05 Travhys was making his stand as he battled out with #06 Chino on the last 2 laps not giving in to the pressure where they almost had contact while on the stretch.

Finally, at last stretch and as the checkered flag was raised, it was Travhys who came in 2nd with a 0.058-second lead against Chino who settled at 3rd place.

Race 2, September 8 – Riders, once again, started with the aim to take the first corner, it was #01 Jakob who secured the lead while taking pace cautiously. He broke away from #09 Marco, #06 Chino and #05 Travhys, who was again taking the race to the excitement. Side by side, -they took on each other to get P2.

Travhys relied on his pace as he overtook the two other riders on the straights, while Chino and Marco late broke on the corners to battle out and sustained their ranks.

It was the main highlight of the race, as the crowd closely watched who gave in to the pressure, but no one was giving up and kept on pushing the throttle and their skills to outwit and outrace each other.

On the other hand, two pairs #08 Kurt Villanueva and #07 Kokoy Mangibin  as well as #03 Chad Mangulabnan and #02 Andrej Ondillo, found themselves racing with each other to finish the 8-lap race. The Checkered flag was raised and, #01 Jakob secured his Championship for the HPDC 2019. Following him were #05 Travhys for 2nd and #09 Marco for 3rd place, respectively.

To sum up the results of Round 5, Sablaya bagged the HPDC 2019 Championship. Travhys, on the other hand, found his pace in his CBR150R Race machine and shown that his time had come to join in the podium as 2nd place.

All riders exhibited an impressive race performance, showing that the riders have grown and that their skill level has increased.

Below are the Round 5 Results and Overall Standing: 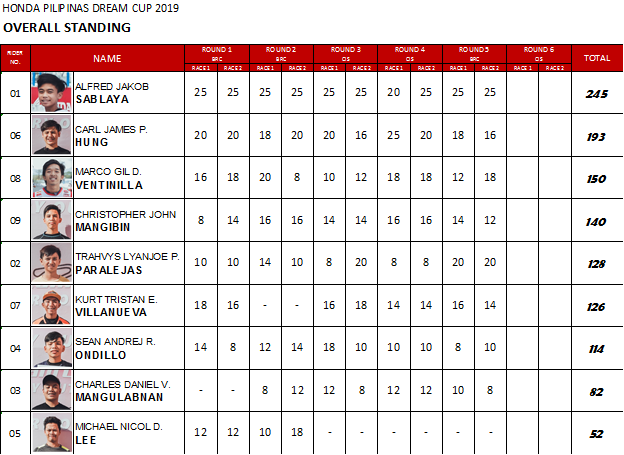